Analysis of all English leagues results by division

The size of the goal has never changed, the length and width of the pitch has never changed, the ball is the same - although the ball was significantly different when I was a young boy. It was made of leather and soaked up water. It became as heavy as a brick and was no fun at all if it hit you in the face! But fundamentally, whether the game is played in the English Premiership or Scottish League Two, everyone is playing with the same equipment. How and why do the leagues differ?

From our perspective, we're primarily concerned with betting returns from these outcomes as opposed to actual home, draw, and away win rates, but win rates in each division is where we'll start.

We can create a slightly different 'rank' table to see how home advantage appears to decline as we come down the leagues. The next table adds the home and draw ranks together, and adds the draw and away ranks together: 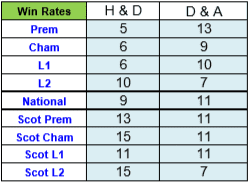 Returning to the original rankings: 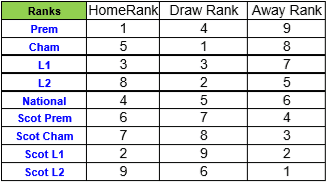 Fewest away wins occur in the top two leagues. The likelihood of away wins increases as we drop down the table. I feel this is quite telling in that home advantage appears to count for more when the quality of the football is higher.

The key for bettors isn't primarily to know which league produce the most or fewest homes, draw, or aways, the key is to know whether the bookmakers are under pricing or over-pricing these outcomes. The next table looks at the home returns in each league: 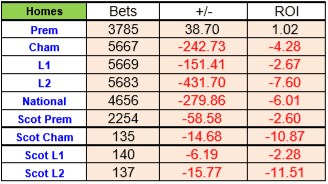 Quite surprisingly, all home teams could have been backed in the English Premier League with a profit made. Backing home sides in the other leagues shows varying degrees of losses. Covering a large sample size, League Two has shown poor returns for home backers. 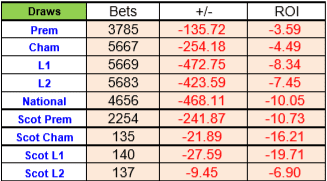 It's extremely noticeable how backing the draw in the English Premiership and Championship loses the least. In effect, the draw gets in the way more in these divisions than the rest. Whilst these sides will have the best strikers I believe they it is the fact they have the better defenders that means they are able to defend a lead or shut up shop better than the other leagues.

The other particularly pertinent point is that I believe the bookmakers probably use a very similar pricing model for the lower leagues to the one they use for the top two divisions. This means they generally over-estimate the draw chances, culminating in them under-pricing that outcome in the lower leagues. This is one of the reasons why betting on away sides in the lower tiers tends to be more profitable than in the top two levels. 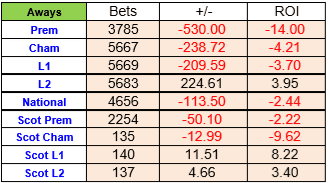 Blindly backing all away teams in the English Premier League has loss a massive 14% from 3,785 games. This puts into perspective the degree of difficulty in profiting from away bets in the top league. Part of the reason for this is the bookmakers favourite/longshot bias. As the odds increase, the bookmakers generally increase their profit margins. There have been many more very long priced away team in this league than in the other divisions.

Of course, this raises the question as to whether the bookmakers are now 'smarter' at pricing League Two away teams than they previously were? There is no definitive answer to that question as a sample size of 989 bets is insufficient to be able to draw any conclusions.

Every outcome of every game is possible regardless of the league we're looking at but as a general rule it is easier to make money from backing home teams in the Premiership and away teams in the leagues from League One down. The Championship is probably the toughest league of them all. The returns from backing all outcomes in that league confirm my theory:

The losses from backing each of the three outcomes are almost identical. It doesn't mean we can't make money in this league, it means there are likely to be fewer obvious opportunities.

As with all data, it remains difficult to predict what may happen in any one given season based on these long-term figures, but they do give clues as to where the greatest degrees of difficulty lie, and where the best betting opportunities are likely to be.

In case you are enjoying this article we recommend you reading "Statistical evidence to prove bookmakers make mistakes". It is an interesting read the underlines the fact you can make money form sports betting as bookmakers do make mistakes.